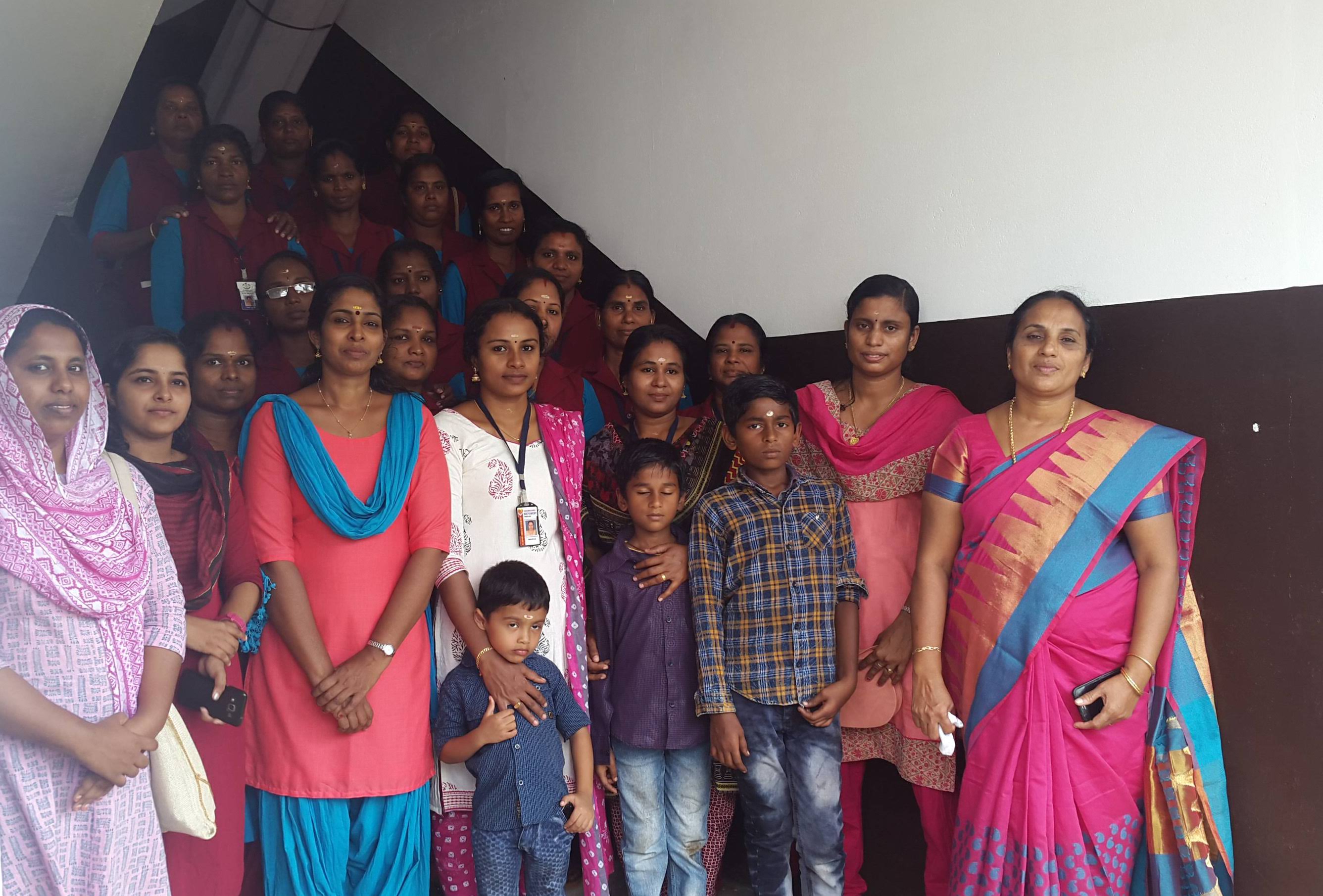 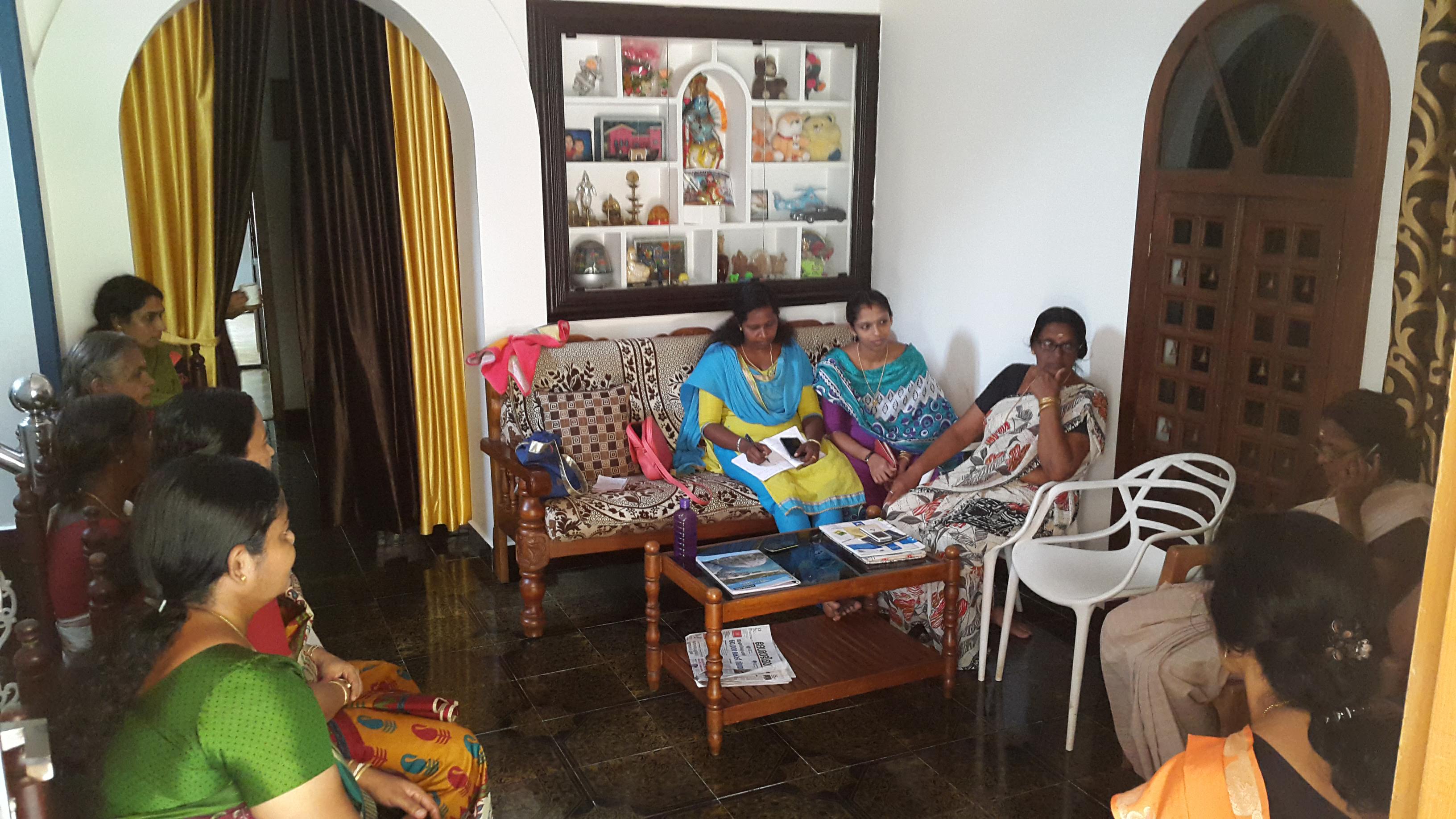 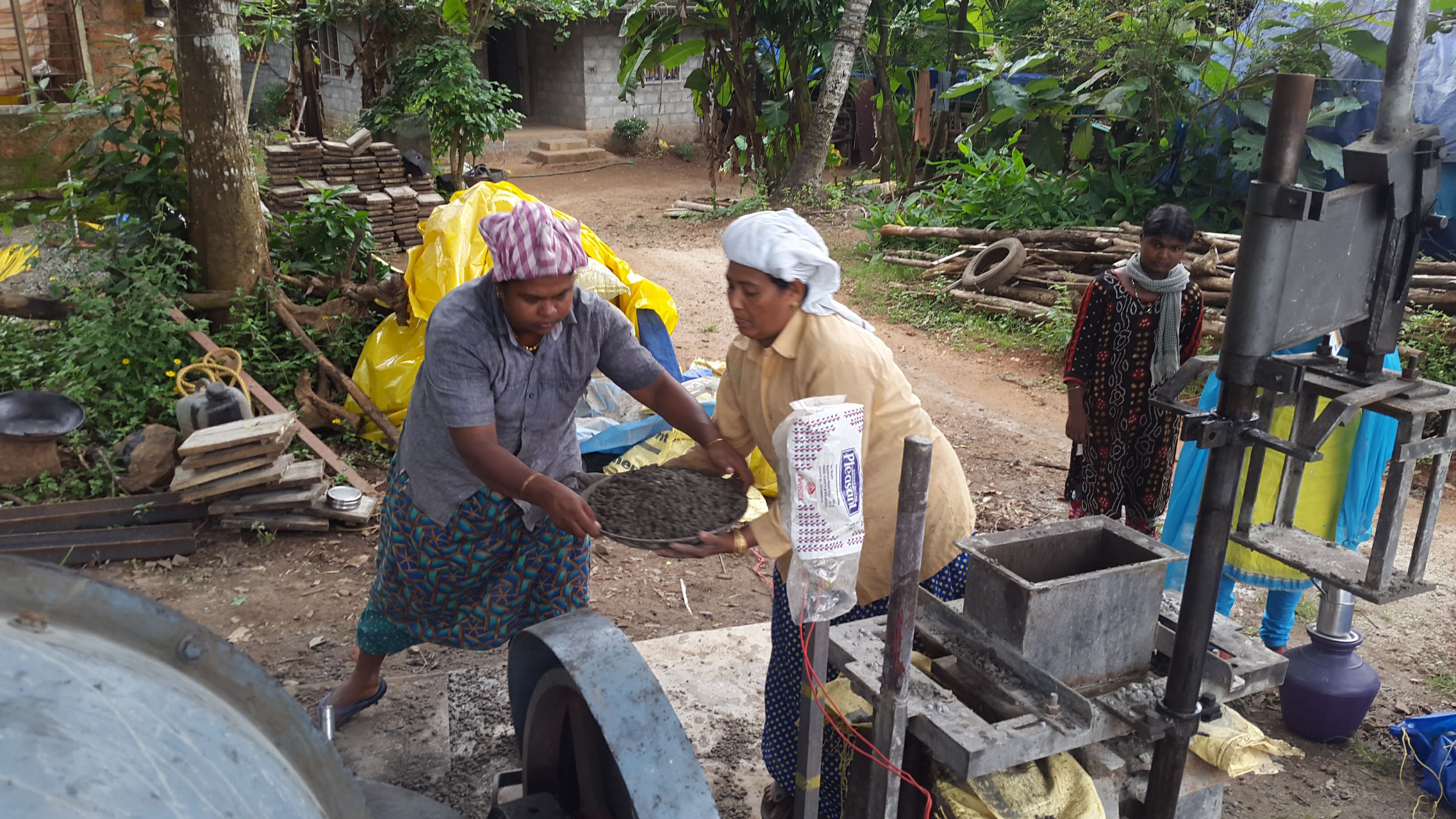 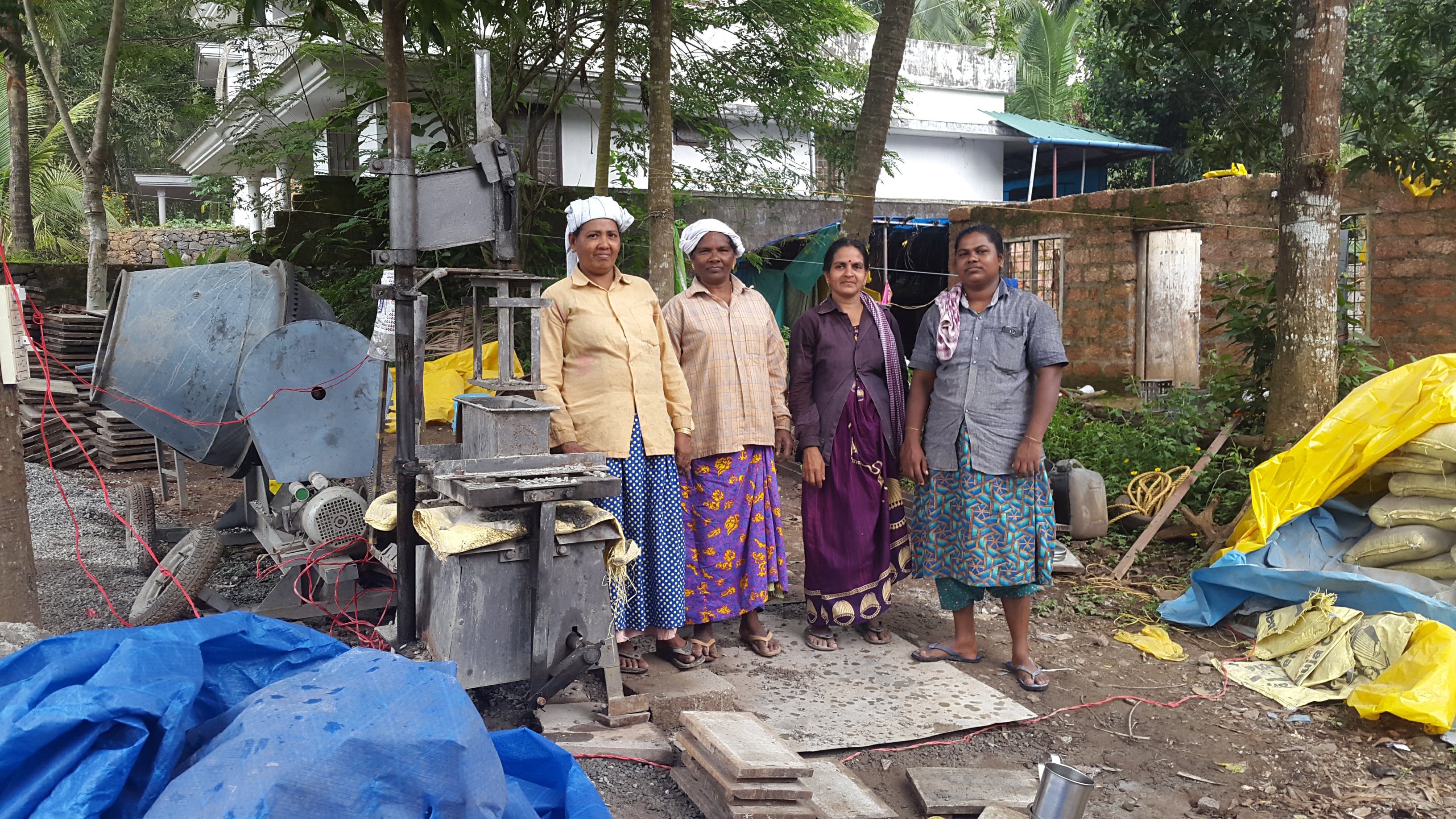 Sindhu Balan was haunted by a story in her local paper. Six months after their wedding, a man abandoned his wife and took her gold jewelry; he had another family in the Middle East. “If they had done some careful checking...they would have found out about his character and this would have never happened,” Balan said.

Background checking can be difficult, but Balan thought of the 150 women’s groups, who met weekly in her village of Porkulam in central Kerala, and their vast family networks. Similar groups existed across the state, and they could be used to vet marriage profiles. In 2016, Balan launched Kudumbashree Matrimonial. Men are charged ₹1,000 ($14), and women can join for free. The site has 16,000 profiles and has arranged 140 weddings so far. Its users span Kerala and other Indian states. There are even users from Canada, Germany, New Zealand, and the United States. “Basically, we have profiles from wherever there are Malayalis,” Balan said.

Today, Balan’s independent business has expanded to five offices in Kerala with 16 staff members, all of whom are women from the Kudumbashree ("prosperity of the family") network, a Kerala state government initiative founded in 1997 with the goal of eradicating poverty.

S. Harikishore, the executive director of Kudumbashree, explained that since poverty is now nearly eliminated in Kerala, the program is focusing on women’s empowerment in a more globalized world. Kudumbashree Bazaar, for example, sells 450 products online, such as soap, honey, and chocolate, which can be shipped anywhere. Amazon India recently opened a portal on its site for Kudumbashree products.

Kudumbashree now has 4.3 million members in its neighborhood women’s groups, and is one of the largest women’s networks in the world. Though Kudumbashree was originally restricted to women with families below the poverty line, membership now includes the middle class. New groups focus on elderly and transgender women. The model has expanded to 16 other Indian states, and even to South Africa, Ethiopia, Azerbaijan, Uganda, and Tajikistan.

Each neighborhood group collects weekly membership fees, which vary depending on how much members can pay. From this pool, members take out loans to found ventures, repair homes, or finance their children’s education or weddings. In 2018, Kerala allocated ₹1.88 billion (~$27 million) to Kudumbashree, mostly funneled through the panchayats, or local village councils. Panchayats work closely with neighborhood groups and provide training and support for local businesses, including producing and selling coconut oil, farming crops, raising chickens, and all-women construction crews.

These jobs are needed. Despite high literacy and education levels, Kerala reports the highest female unemployment rate in India, at 14.1% in 2011-12 vs. 2.9% for males. Although national unemployment data has been contentious, India’s unemployment rate was reported to be 2.3% in 2011 and grew to 6% in 2018.

“We have a culture of women staying at home to stay respectable,” explained J. Devika, a feminist scholar and professor at the Center for Development Studies in Trivandrum, Kerala. “Kudumbashree jobs can be viable jobs if women are supported in their struggle against social stigma. There are lots of women who are struggling to do interesting things.”

However, despite the millions that participate in its microfinance lending network, it’s still a challenge for Kudumbashree to employ these women.

“We want to bring everyone to livelihood activities but there are limitations to the budget,” explained Harikishore. The program offers training and support to 60,000 agricultural groups. Another 20,000 are non-farm small businesses run by women. But that still means only about a quarter of the state’s 277,000 neighborhood groups are engaged in microenterprises.

One field where Harikishore sees opportunity is training women in construction.

Over 400 Kudumbashree construction units have been set up across Kerala. One of them is the Skyart Group of seven women in Thrissur. On a cloudy Saturday afternoon, four of the women are making concrete blocks. Soumya Mathai, 35, shovels the concrete into a wide shallow basin. Chitra Ayappan, 50, then pours the concrete into a rectangular mold. Ayappan wears an industrial glove two-sizes-too-large to tamp the concrete down and then brings a heavy lever down to set the block. Elsy Mathai and Padmavati Chandra, both 50, each carry one side of the 52-pound block and set it to dry for 15 days. They will need to make 1,400 blocks to build a 400-square-foot house.

“Some people criticize our work, saying, ‘Oh, will the house stay up after women construct it?’ But we know that if a man or a woman builds it, it doesn’t matter,” said Soumya Mathai, who leads the group. The women went through two rounds of a month-long training to learn construction basics, after which the local village council awarded them contracts to build houses. Skyart is now working on its second contract.

The pay is significantly higher and more consistent than agricultural work. For a day clearing weeds, the women can expect ₹400 (~$5). Construction promises ₹750 per day (~$11). However, there are other costs. Though partially subsidized, the group still had to take out a loan to rent the machinery to make the concrete blocks. The group repays the loan monthly.

They will be getting a uniform and hard hat soon. For now, they wear sandals and a long dressing gown topped with a man’s shirt. Since their training in November 2016, they’ve had no accidents. “If we stand together, then we’re not going to have any trouble,” said Soumya Mathai.

However, Devika criticizes Kudumbashree for not fully solving women’s unemployment. Instead, she says the government has chosen a “housewives model,” which results in employment opportunities that are similar to women’s existing chores, like housework and caring for children and elders.

“Kudumbashree is not a women’s movement. It’s a family movement,” she said. “The family’s good is not enough, it has to be for the women’s good.”

Balan’s Kudumbashree Matrimonial now offers a catering service for large events, for which she has hired 60 women. Eventually, Balan would like to provide a one-stop shop for all wedding-related services, including bridal makeup, hairstyling, photography, and chauffeurs for the big day. “I want to expand the matrimonial site to all of India and the whole world,” Balan said. “This is my dream.”

Mary-Rose Abraham is a multimedia journalist with over 15 years of experience as a reporter and producer. Her stories have featured in ABC News, NBC News, NPR, BBC, Marketplace, Yahoo! News, National Geographic, Mosaic Science, The Guardian, and Vice.

Read our other stories

What did you think of this story? Click a mango to give us feedback.