Against the symbolic backdrop of the beach, Gurinder Chadha and Meera Syal’s film captures what a single fleeting day of freedom can do for Brown women. 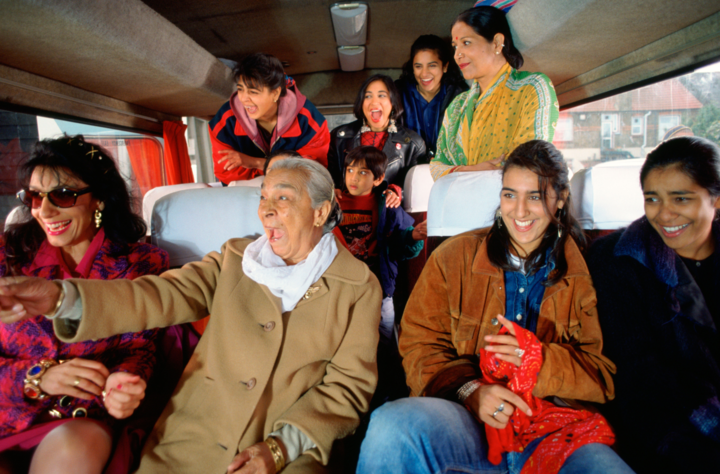 "Bhaji on the Beach," a 1993 film written by Meera Syal and directed by Gurinder Chadha

Whether you’re in Mumbai or Miami, picnicking at the beach is an essential Brown community experience. Our shared flashbacks involve visions of driving to the shore in a vehicle that smells faintly of kebab sandwiches, being misted by the salty ocean, relaxing on bamboo chatais, sea water soaking aunties' sari hems and shalwar painchas, uncles dusting sand off their kids’ T-shirt “swimsuits” before the ride back home. But family outings are also rarely drama-free. There’s bickering in the car, dampened moods over forgotten tiffins, scoldings followed by disinterested adolescent eye rolls, and, lastly, the odd gender segregation. As if by nature, the men flock together to sip chai from thermoses, while the women serve and look after the kids.

In their 1993 film Bhaji on the Beach, director Gurinder Chadha and writer Meera Syal use this nostalgic experience as their canvas to engage viewers from the get-go, but the story is never without twists, heat, and a whole lot of flavor, quite like bhaji. They manage to fit a variety of serious, crucial social issues plaguing the South Asian community against the unpretentiously airy backdrop of a beach picnic.

In the film, a group of Punjabi women who share a neighborhood, but come from varying walks of life, embark on an all-women’s day trip — organized by local non-profit Saheli Asian Women’s Group — from Birmingham, Engla