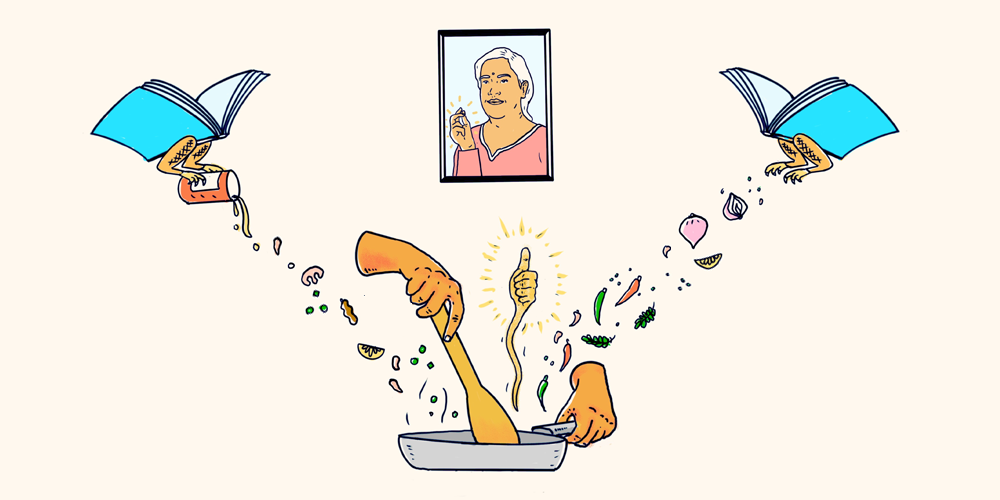 Abhilash Baddha for The Juggernaut

In 1974 Amravati, Maharashtra, 20-year-old Radha Khanolkar would use her copy of Ruchira — a popular cookbook of traditional recipes from the state — to make the lightest, crunchiest spirals of chakli and melt-in-your-mouth rava laddoos. In 2002 Mumbai, Soumitra Velkar began recreating long-forgotten recipes from his late grandmother’s 1948 edition of the now out-of-print cookbook Gruhini Mitra. He learned to make dishes such as blimbachi sheer — a curry made with sour bilimba berries — and kel-bombil, which paired local Bombay duck fish with ripe plantains. During the lockdown, I began cooking from mum’s copy of Annapurna: cheesy potato puffs, crispy sabudana vadas served with mint chutney, batatyachi bhaji, kakdichi koshimbir with lots of green chili, vermicelli kheer, and aamti — the best comfort food in the world.

Though born in different generations, Annapurna, Gruhini Mitra, and Ruchira inhabit the same world. They were each the go-to cookbook of their time, written in Marathi for the Maharashtrian community. Mothers and grandmothers would often give them to new brides. “Community cookbooks” would be the blandest way to describe them. They were joined by the Tamil-language Samaithu Par; the English-language East Indian Cookery Book for Konkan Christians in Bombay; Rasa Chandrika for Saraswat food; the Gujarati Vividh Vani for Parsi kitchens; and Syrian Christian cookbook Recipes For All Occasions — reassuring yet no-nonsense teachers with no time for the romantic, nostalgia-tinged musings of modern-day cookbooks and food blogs. You learned from these c