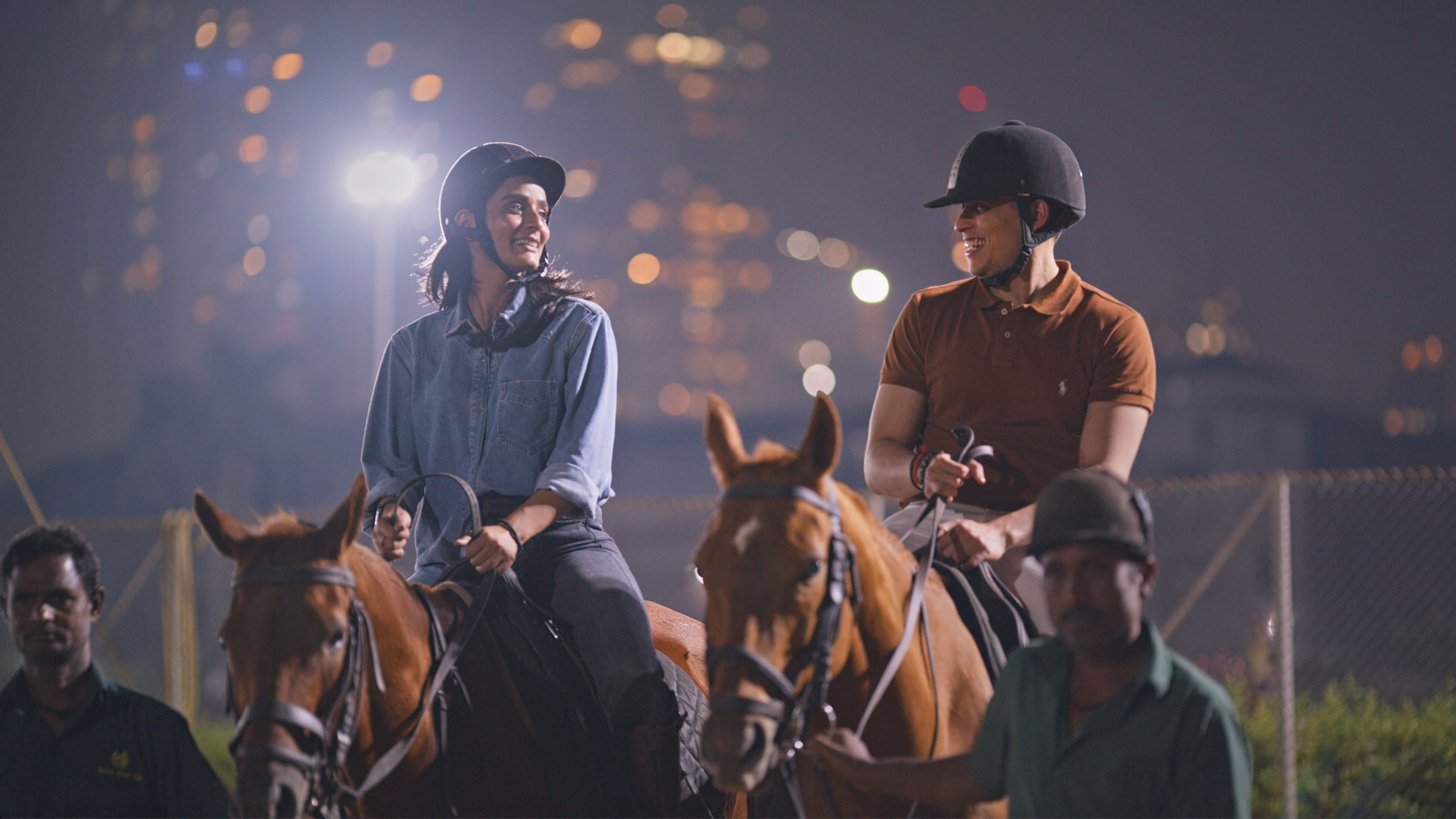 Pradhyuman on a date with actor and model Rushali Rai, set up by matchmaker Sima Taparia on Netflix's "Indian Matchmaking." (Netflix) 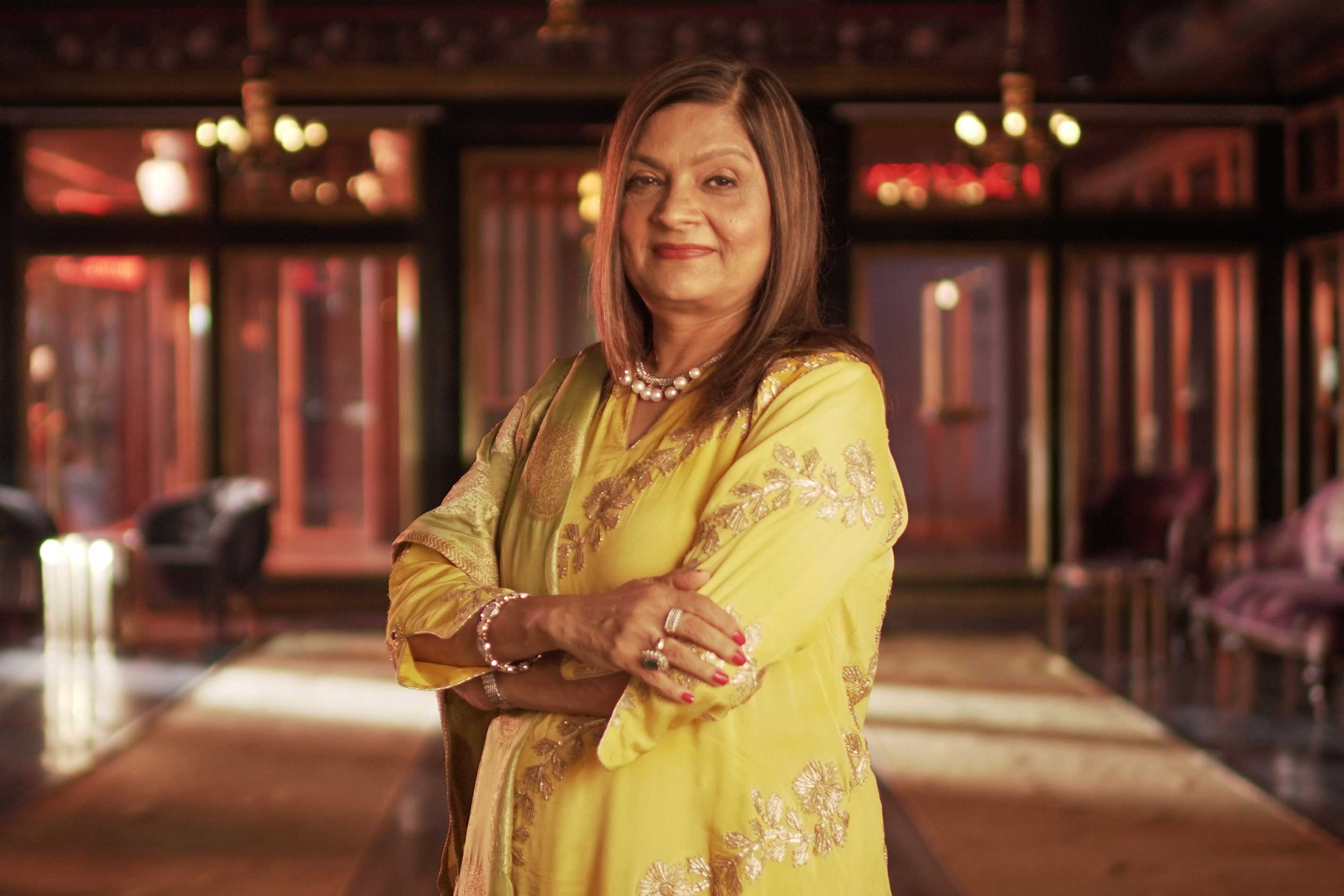 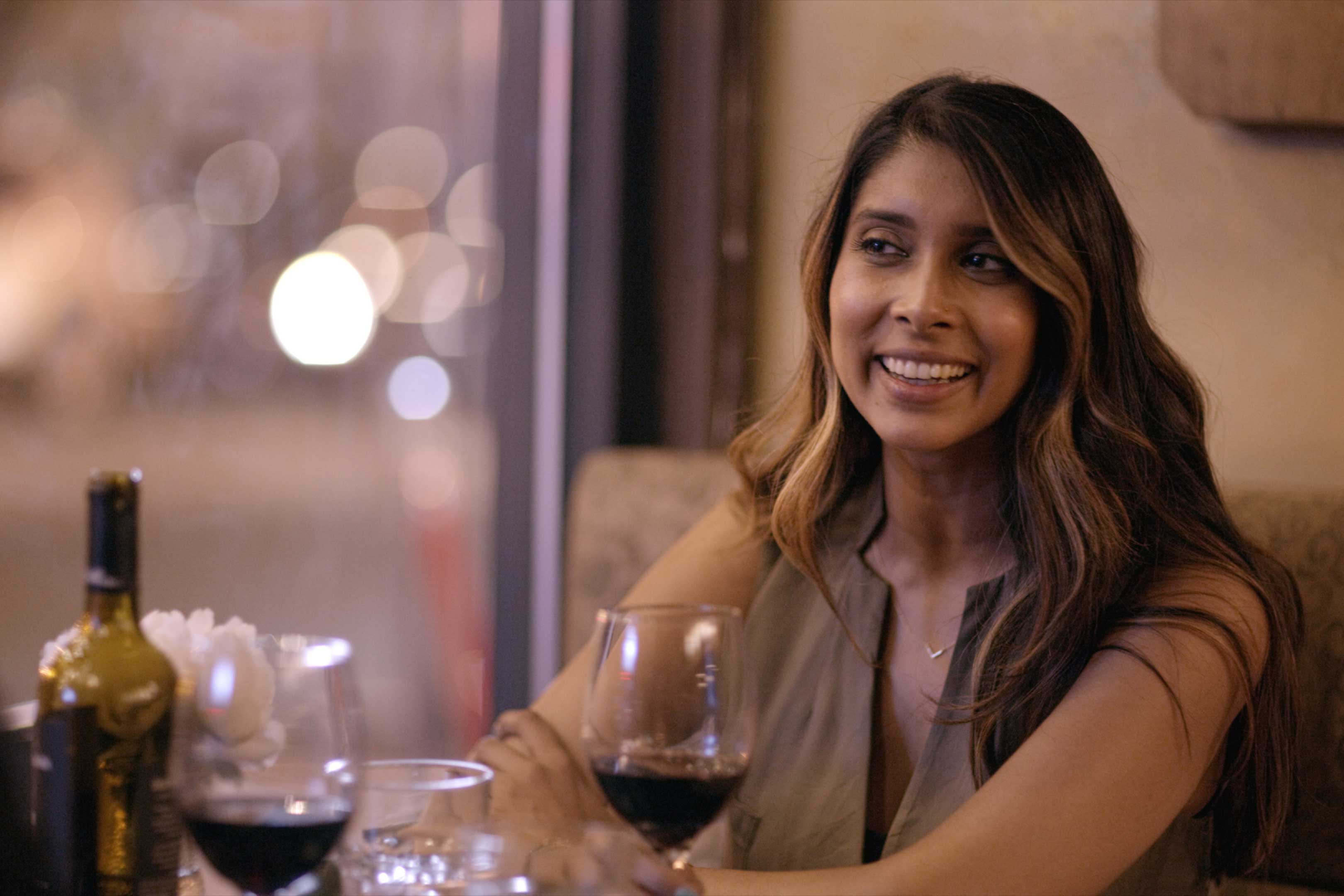 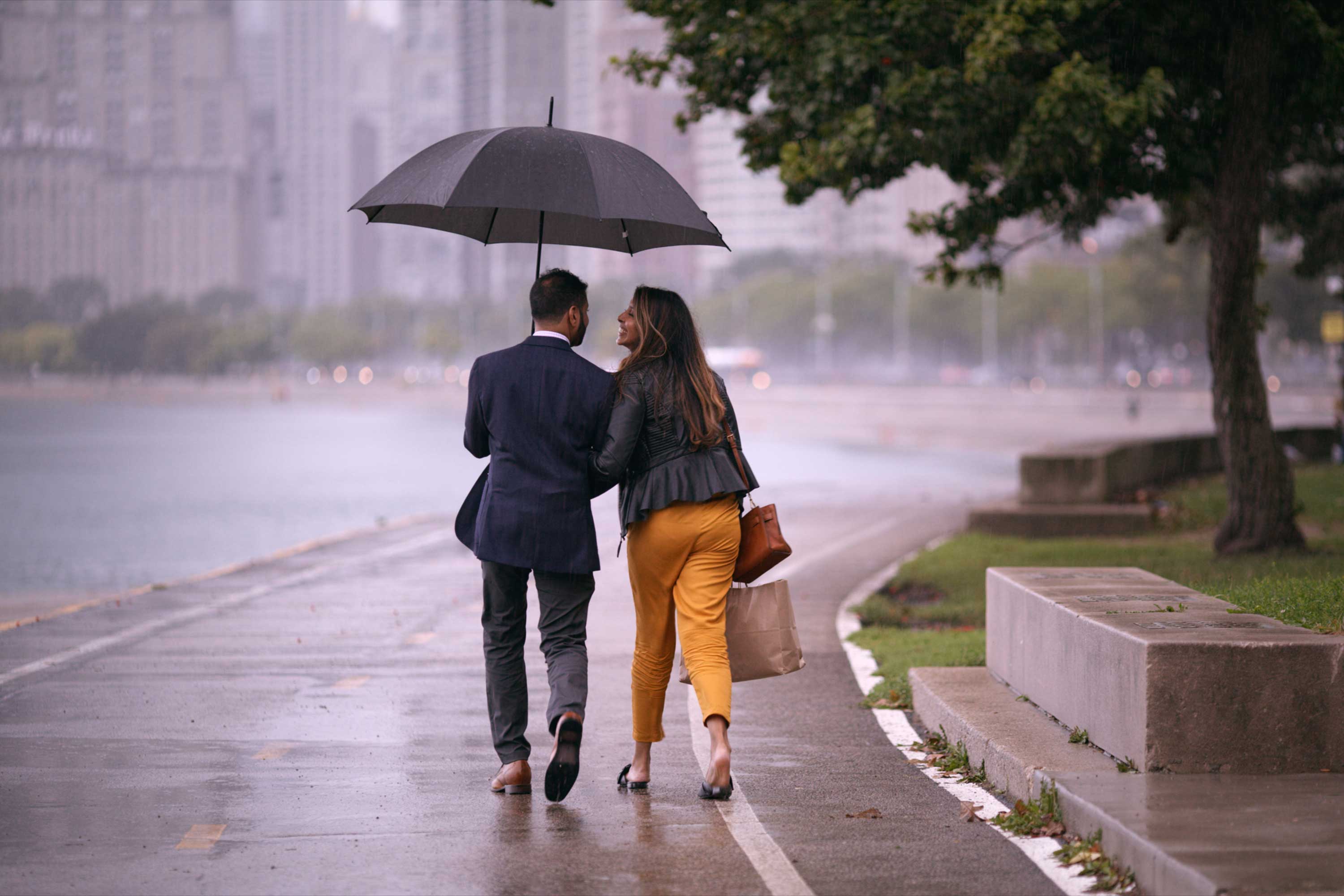 Nadia on a date with a prospective partner in Chicago. (Netflix) 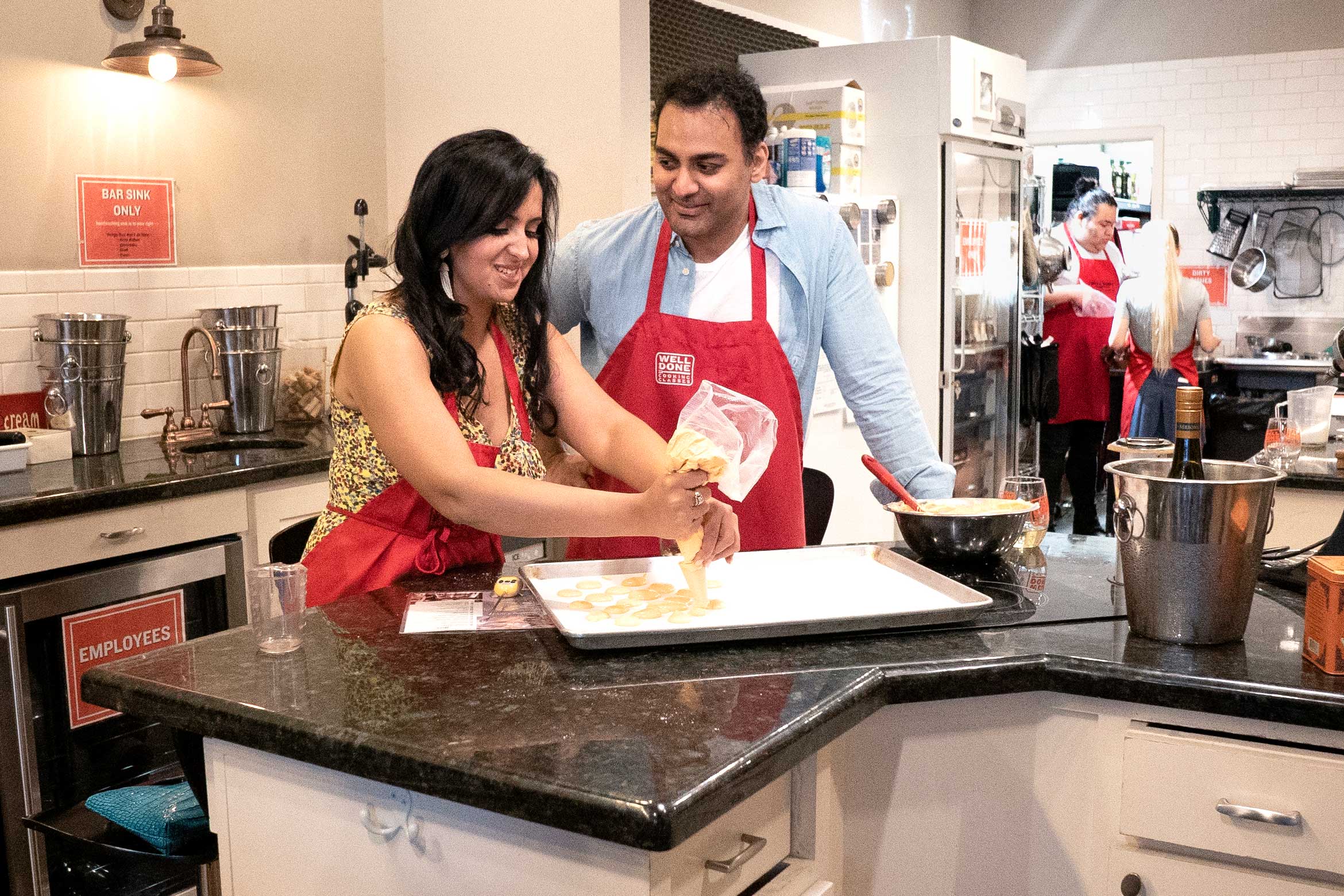 Houston-based lawyer Aparna, on a date with a prospective match. (Netflix) 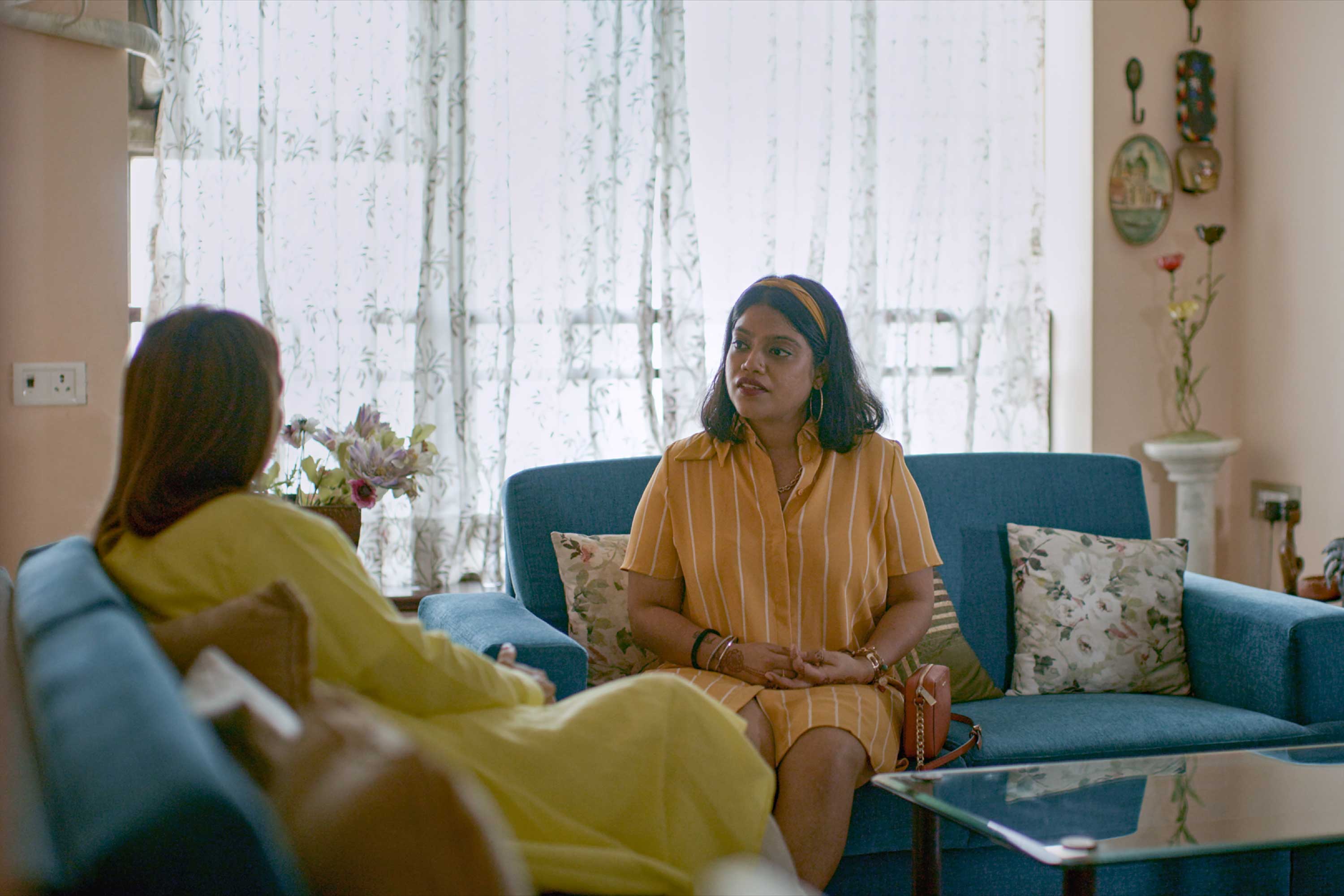 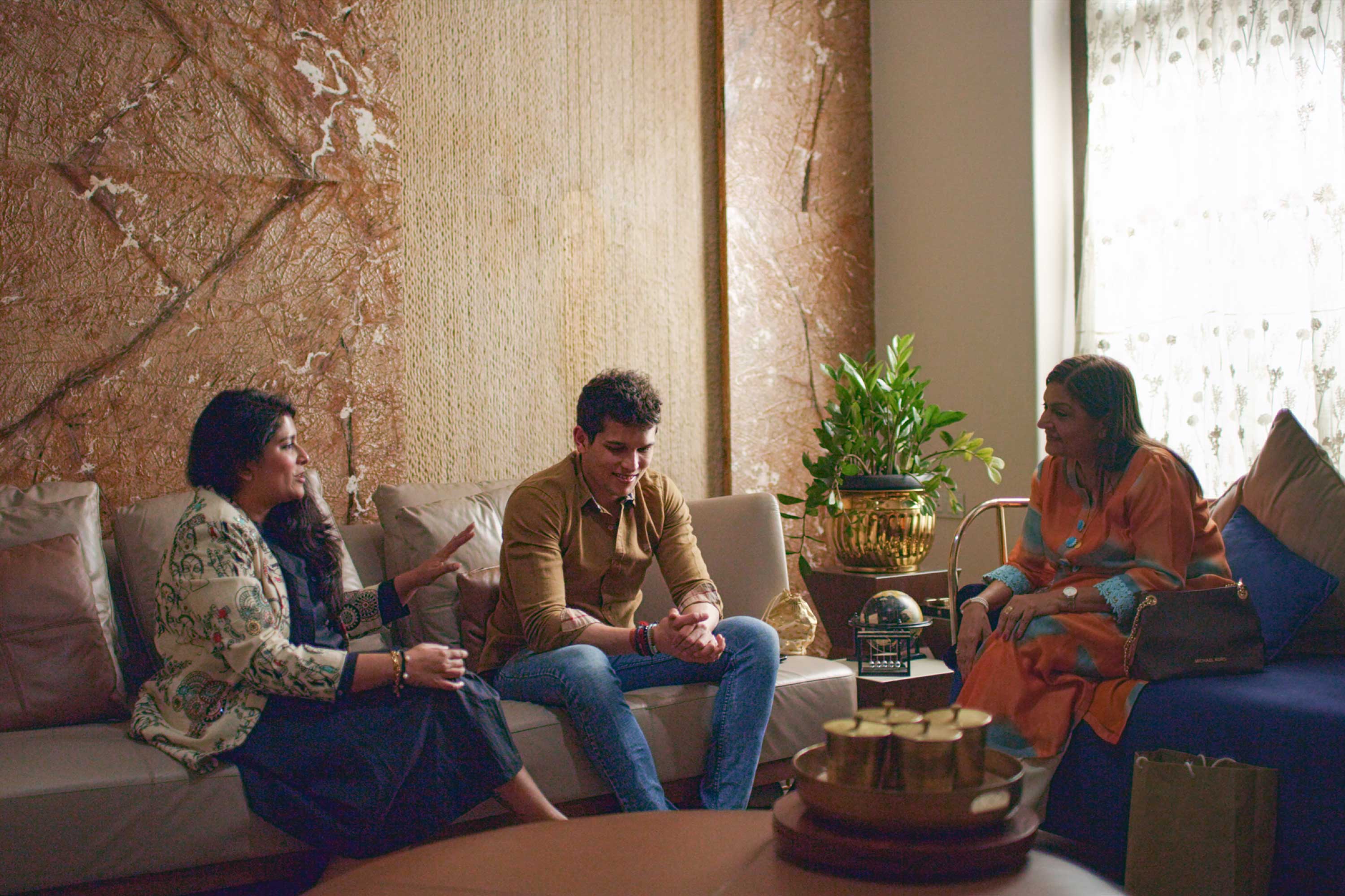 Pradhyuman and his sister meet with the matchmaker. (Netflix) 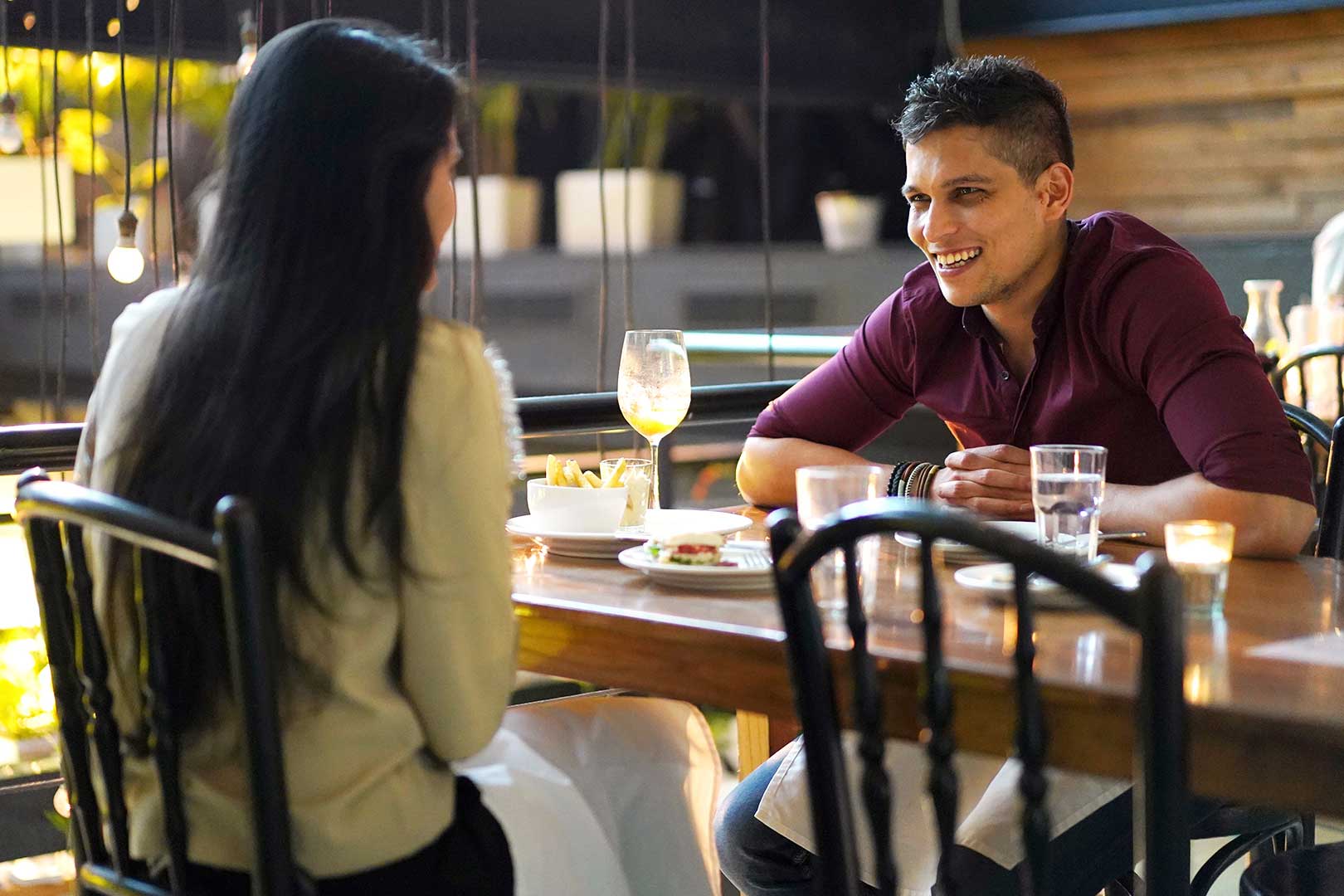 Pradhyuman on a date with a prospective match in Mumbai. (Netflix) 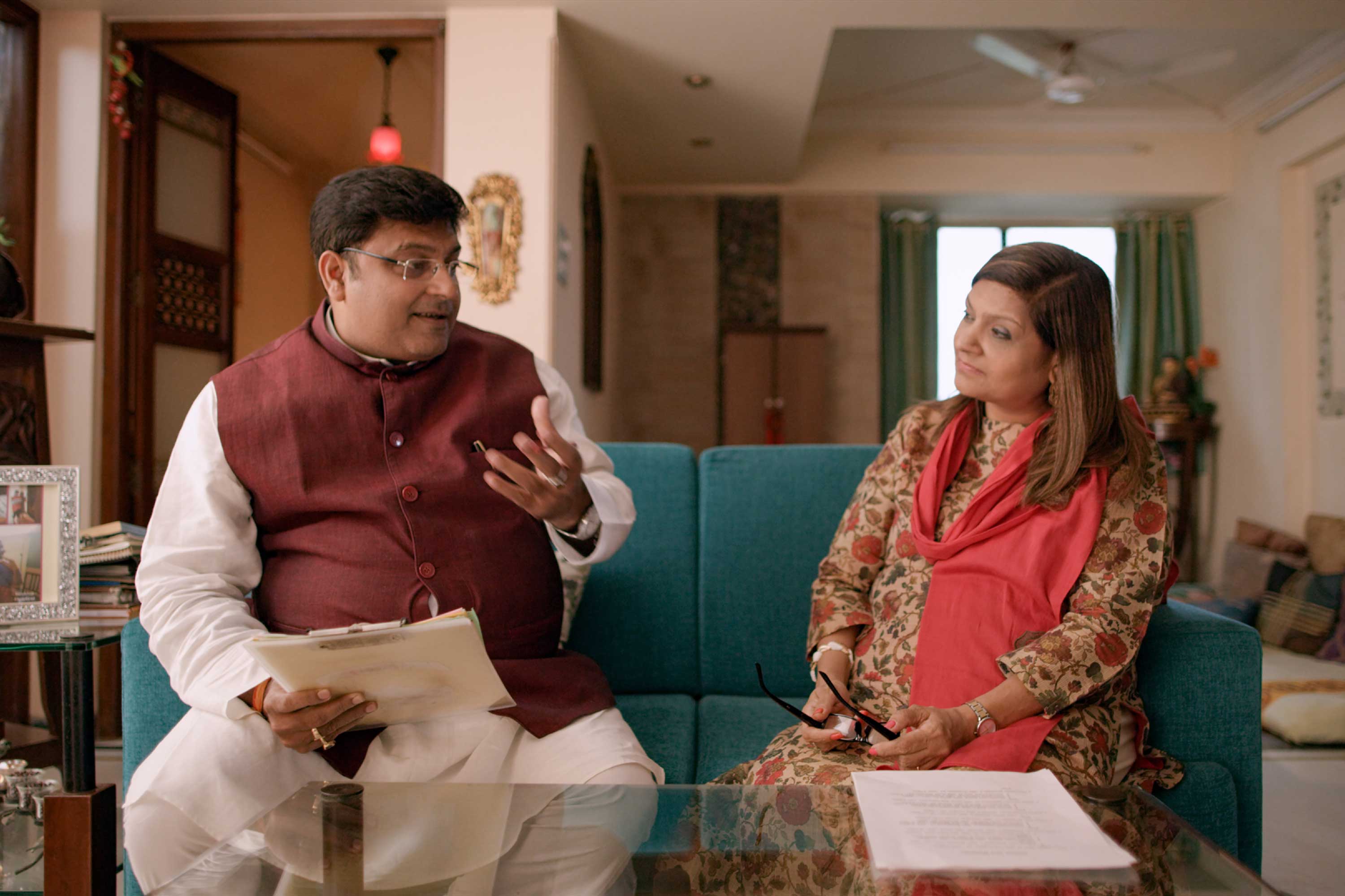 Netflix’s latest attempt to corner an Indian market is entertaining but overlooks crucial issues in the arranged marriage industry.

Pradhyuman on a date with actor and model Rushali Rai, set up by matchmaker Sima Taparia on Netflix's "Indian Matchmaking." (Netflix)

If the pandemic has somehow made you miss old-school, judgmental aunties, then add Netflix’s Indian Matchmaking to your watch list.

The eight-part reality series premieres today and follows multiple single millennials in India and the U.S. who have decided — or in some cases, been told by their parents — to employ the services of matchmaker Sima Taparia, “Mumbai’s top matchmaker,” to find a partner. On paper, it’s a blend of Meet the Patels (2014) with the slick, voyeuristic aesthetic of Netflix’s Dating Around (2019- ). In reality, it is nowhere near either.

Indian Matchmaking, by its very title, purports to show viewers the realities of the multimillion-dollar arranged marriage industry, both in India and within the diaspora. Instead, it gives viewers a series that glosses over or, in some cases, completely ignores the pressing problems with matchmaking. For me, that was the ultimate dealbreaker.

Don’t get me wrong: the series is beautifully shot and still manages to showcase a variety of experiences. Some candidates meet with Taparia on the insistence of their parents — like painfully shy 25-year-old Akshay, whose mother Preeti blames her high blood pressure on Akshay’s unmarried status. Others, in particular 34-year-old New Jersey event planner Nadia, employ the matchmaker because dating, online or otherwise, hasn’t yet led to long-term relationships. The frustration, the parental pressure, and cultural challenges are often relatable, as is watching the awkwardness or, at times, true chemistry during first dates.

We don’t stick with any matchmaking candidates for all eight episodes. The only consistent person is Taparia — which is unfortunate because many of the participants, such as Nadia or the ever jolly Texas school teacher Vyasar (who reminds me of an Indian Seth Rogen), steal the spotlight in the limited scenes that they’re given. Frankly, they’re the ones I wanted to follow, not Taparia.

Instead, the series follows the matchmaker as she meets with each prospective bride or groom to define their “criteria” for their potential partner — which can include everything from a preference for someone who loves to travel, to desirable heights. In the first episode, appropriately named “Slim, Trim, and Educated,” Taparia pores over her handwritten spreadsheets of clients. “They want tall. They want fair. They want from a good family,” she tells her husband, seated next to her. “They want everything,” he responds.

For a country with an overall average height of 5’ 2”, the preoccupation with height is particularly rich. But what especially stood out was how Taparia normalizes the racist desire for “fair” partners — it is downright infuriating to watch, especially right now.

Nadia on a date with a prospective partner in Chicago. (Netflix)

The global conversation about anti-Black racism has forced South Asians around the world to take a hard look at cultural norms, such as the market for skin lightening — predicted to reach $31.2 billion globally by 2024 — that perpetuate systemic discrimination. In the matrimonial industry, sites like Shaadi.com have long included the option for users to not only describe their skin tone, but also what skin tones are preferable in their partner — including fair, wheatish, and dark. In June, Shaadi.com (finally) removed the filters in response to an online petition with more than 1,600 signatures.

Houston-based lawyer Aparna, on a date with a prospective match. (Netflix)

In nearly every episode of Indian Matchmaking, Taparia makes some mention of a candidate that is a good option partly because they are fair-skinned. It perpetuates South Asian discriminations based on skin tone, yet we never meet candidates who speak about how shadeism has impacted them or their romantic prospects. In the same way, the caste system's role in arranged marriages is never explored. In the first episode, Taparia says, "In India, we have to see the caste, we have to see the height, we have to see the age." However, the biodatas shown do not overtly list caste preference, and there are no explicit discussions around caste outside of a blink-and-you'll-miss-it scene in the last moments of the final episode.

That’s not to say that the series completely ignores the matchmaking industry’s problems. Delhi-based designer and self-described feminist Ankita shares that when her parents first started looking to arrange her marriage, relatives told them, “Boys are looking for pretty girls, so we don’t know what to do.” Later, Ankita describes how that experience made her feel like if she didn’t lose weight, she couldn't be loved. She shared how it took time before she realized: “If a man can’t accept me for who I am, then I’d rather not be with that man.” (For those who have seen Dating Around, she gives full Gurki vibes and I lived for it.)

Indian Matchmaking also touches on stigmas surrounding divorcees, such as the truly lovely 36-year-old single mom Rupam or Indo-Guyanese Nadia, and the discrimination they face. Taparia tells Rupam that because she’s divorced, she will have limited options, and that’s just “a fact of life.” I found that framing so frustrating. It felt like the show accepted and normalized aspects of the arranged marriage industry that desperately need to evolve.

Pradhyuman and his sister meet with the matchmaker. (Netflix)

Case in point: In addition to ignoring the issues of caste and colorism, the series also only includes clients who are middle- to upper-class and also fails to mention what this process looks like for the LGBTQ+ community.

It could be argued that with Indian Matchmaking, Netflix is simply seeking to reflect the industry through the client list of one prominent matchmaker. It’s not a documentary — it’s a reality show. In theory, it isn’t intended to be a deep look at the whole industry, its historical roots, flaws, and qualities. It’s simply a snapshot of the process, in an entertaining format. However, the show is still depicting a version of reality crafted through careful casting and producing. That’s why it’s particularly notable which voices and stories are missing.

Pradhyuman on a date with a prospective match in Mumbai. (Netflix)

In advance of its July 16 release, Netflix posted trailers for Indian Matchmaking on YouTube.  On the company’s Netflix India page, multiple commenters said the show was clearly made for non-resident Indians (NRIs), or as one user put it: an “Indian series in a western style.” On Netflix’s official page, YouTube user Ash put it best with the simple question: “literally who is this made for??”

The simple answer seems to be that this series is part of Netflix’s attempt to gain a larger foothold in the Indian entertainment industry. The streaming giant spent $400 million on Indian content for 2019 and 2020, and the company wants to attract 100 million Indian subscribers to the platform. (Mindy Kaling’s hit Never Have I Ever, a Netflix series that appears to be specifically aimed at the South Asian diaspora, was also recently renewed for a second season.)

But after seeing the series, it feels like it was largely created for the non-South Asians who have repeatedly asked me if I have been “promised” to anyone. It’s a way for people to see some of the wild criteria and marital process — including visits to pandits, astrologers, and face readers — without giving viewers the necessary context to understand what they’re watching.

That’s what makes Indian Matchmaking so hard to love.

Ishani Nath was born and raised in Ontario, Canada, though that's never stopped Uber drivers from asking her where she's *actually* from. She is currently a freelance writer and editor who has appeared on CBC and has bylines in FLARE, Maclean's, and HuffPost. Getting to cover everything from the latest must-see movie to the cultural significance of Indian jewelry for second-gen kids is the reason why Ishani loves her job — even on Mondays.

Editors' note: An earlier instance of how caste was mentioned in the show has been updated.